I would all but guarantee everyone that I spend more time on YouTube watching old games than pretty much everyone else on the planet.  As Terry pointed out on an earlier podcast, the games I watch are about as random as anyone could select.  The big question is this:  WHY?!?!

Why in the hell would anyone watch random games from 20, 30, 40, 50, 60 years ago, especially if you already know the results?  Well, I’m always looking for something different.  What’s cool about watching these games is not rewatching what I already know, but rather what has been forgotten. 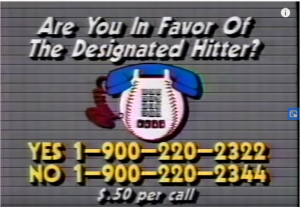 Then, some serious events of the day.  President Reagan was recovering from surgery to remove a cancerous tumor from his colon.  He was just starting his second term while we were still involved in a Cold War.  Times have always been crazy in our world.  Also, G.E. had a couple of former and current employees under federal indictment for false reports. 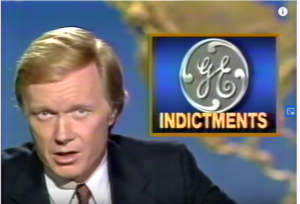 As I mentioned in my column about the 1980 NLCS Keith Jackson covered the Texas Oklahoma game in Dallas the same day as Game 4.  As crazy as Game 4 was, Jackson covered a game against two of the top programs in the country and that game featured 14 turnovers!  Then he flew back to Houston to cover the NLCS.  I miss Keith Jackson.  By the way, why in this game late in the 1980 season was he trying to impersonate Merlin Olson? 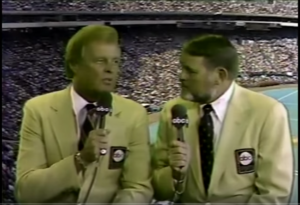 What were we watching in the mid-80’s?  Well, there was this particular Friday night after Thanksgiving in 1984.  Everyone who watched remembers only the final play.  What I found more enjoyable is the Friday night lineup on CBS: 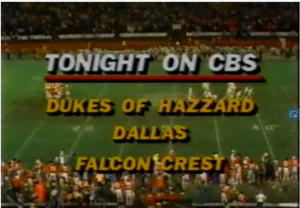 Dukes of Hazzard – “Cale Yarborough Comes to Hazzard”:  While visiting the Dukes, Cale Yarborough comforts an orphan at the Tri-County Hospital … and later finds himself (along with Bo and Luke) in a heist of Hazzard Bank.

Dallas – “Shadows”:  Miss Ellie takes drastic steps to make Clayton feel secure at Southfork over J.R.’s objections and Bobby’s discomfort. Ellie feels that Clayton may be deliberately staying away from home and Donna suggest she remove Jock’s portrait from the house.

Falcon Crest – “The Trump Card”:  Chase is absolved of all blame for the plane crash. Lance tries to seduce Lorraine. Richard and Gustav romance Francesca, who signs over her share of Falcon Crest to Angela. Melissa tries to end her relationship with Greg.

I don’t know why, but it was the “Falcon Crest” that cracked me up.  And no need to thank me; thank IMDB.com.

Well, I also found a science awful game from the 1970 NFL playoffs.  The Lions won the NFC Wild Card and travelled to Dallas for the Divisional Round.  The game was UGLY (the final score was 5-0 and the game was uglier than that).  Which makes this man at the beginning of the video so appropriate.  He’s promoting the Ford Pinto.

Some things just don’t age well.  Hey kids!!  Do you guys ever remember seeing the goal posts in the front of the end zone? 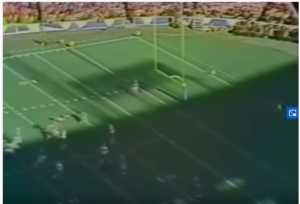 How about this shot from a commercial in Super Bowl XIX?  Hey!  It’s Bobby Orr!! And yes kids, that was a personal computer: 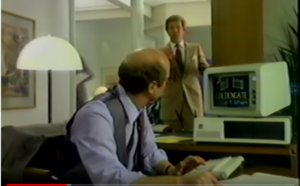 What’s more outdated:  The PC or Bobby Orr’s hair?  Then we have this promo during the game:

I can’t believe this show only lasted 14 episodes.  OK, let’s go the 1989 NLCS, Game 1.  Tom Seaver and Vin Scully both talk about the Giants having the most strikeouts and that being a detriment to them.  Well, their 1,071 strikeouts would have been the fewest in baseball in each of the last three years and next to last the three seasons before that.  The game has changed.  But one thing that hasn’t is that Pete Rose is a topic.  This was shown after a Ryne Sandberg homerun made the score 4-3 San Francisco: 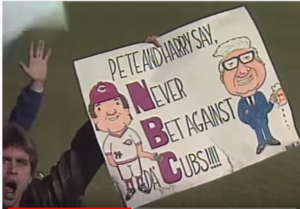 How he is still a topic more than 30 years later is beyond me, but he is.  But when you’re a San Francisco fan, you’ve got this guy as a celebrity fan:

OK, finally, I’ll go to the 1982 All-Star Game in Montreal.  Just six years earlier they hosted the Summer Olympics.  A huge moment was this guy winning the decathalon: 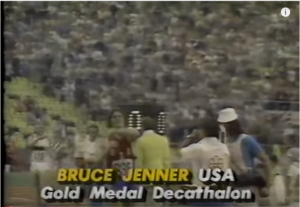 What an Olympic moment.  Now, everyone looks at it completely different.  Back then we’d read about it here.  Kids, do you know what a magazine is? 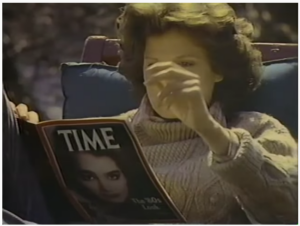 But you know what we can all agree on?  The biggest hit of 1982 in the theatres: 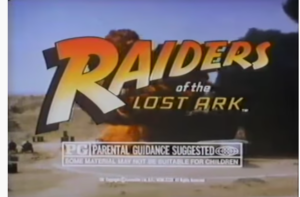 Anyway, there is always something to find in these clips, which is fun.  But you know what I really miss?  Well, that’s in the next blog post . . .